Admin Posted on November 3, 2018November 4, 2018
IT was a period of festivity and people were celebrating the Chinese New Year.
However, at this quiet part of the town, people were screaming for help, and siren broke the silence of the night.
Many passersby stopped to witness the raging fire burning down a building.
Undergraduate Yap Ley Min witnessed all that from her home and she decided to paint a picture based on what she saw.
“The fire took place last year (2017). I saw people gathered at the scene.
“Some tried to help, some talked about the incident, others just watched.
“The fire fighters were busy trying to put out the flames,” she said when interviewed after the ‘Spotlight by Penang Art District’ group exhibition prize presentation ceremony at [email protected] today.
Yap, 21, said she took two weeks to paint her masterpiece.
“I used different colours to paint the people in the painting.
“For example, blue is used for people who bystanders. Green is used to paint those who talked about the incident, and red is used to paint the ones who helped to extinguish the fire,” she said.
Yap was the grand prize winner after her painting entitled ‘Burning District’ topped about 30 other artworks in the competition.
She bagged RM5,000 cash and a solo exhibition at Hin Bus Depot.
Yap would also be given the opportunity to work with a mentor to help her through the journey of developing the solo exhibition.
The ‘Spotlight by Penang Art District’ is a creative platform that nurtures young Malaysian talents and gives them the chance to realise their potential.
The art competition received encouraging submissions from young artists below the age of 30.
Deputy Minister of Tourism, Arts and Culture Muhammad Bakhtiar Wan Chik said the competition provided a platform for young Malaysians to develop and express their creativity.
“It also instils public appreciation for art.
“This group exhibition of Top 20 finalists showcases the best of promising submissions.
“Nurturing and investing in creativity are vital in preserving our cultural expression and identity,” Muhammad Bakhtiar said.
He commended EcoWorld in supporting the initiative.
“Private corporations also play a crucial role in helping to boost the development of arts,” he added.
Also present were Penang Convention and Exhibition Bureau chief executive officer Ashwin Gunasekeran and Penang Arts District advisor Lee Khai.
The art exhibition will run from Nov 3 to Dec 2 at [email protected] in Macalister Road.
On a separate matter, Muhammad Bakhtiar said he was confident that the country could achieve the target of 26.4 million tourist arrivals this year.
“There was an increase in the number of tourists from China, South Korea and even from Europe.
“The number of tourists visiting Malaysia is encouraging.
“I am glad that the Finance Ministry listened to us. Overall, I am happy with the attention given to tourism.
“We hope that the Finance Ministry will be able to give its attention towards arts and culture in the following year,” he spoke on the 2019 national Budget.
Story by Christopher Tan
Pix by Adleena Rahayu Ahmad Radzi 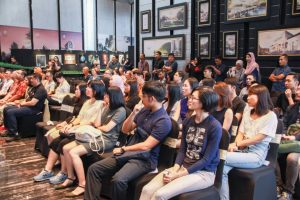