THE commitment shown by the Malaysian-German Society (MGS) in bridging and enabling inter-cultural exchanges between Malaysians and Germans has been commended by the Penang government.

“They are not only celebrations of the German culture, but also a reflection of brotherhood, family and togetherness.

“The MGS has been part and parcel of the state’s communal and social tapestry since 1962; and a familiar presence along the Jalan Air Itam since 1981.

“I am happy that MGS has always been supportive of maintaining the warm friendship and cultural links between Germany and Malaysia,” Chow said in his speech during the MGS’ 60th-anniversary celebration at E&O Hotel Penang this evening.

The guests were also celebrating the MaiBall 2022; two years after it was cancelled in 2020 and could only have a sit-down Christmas Gala Dinner last year.

Ambassador of the Federal Republic of Germany to Malaysia Dr Peter Blomeyer thanked MGS and its team for contributing to fostering relations between Germany and Malaysia, and strengthening friendship between the peoples.

MGS president Dr Wolfgang Mark extended  his appreciation to the guests and sponsors for making the events successful.

He also played a short virtual message from MGS founder Peter Hütz, who was unable to be physically present at the celebration.

Those present were treated to a sumptuous buffet and a powerful performance by Acidic Bunch.

Acidic Bunch is a high-energy six-piece band based in George Town.

Earlier, Dr Blomeyer and his team paid a courtesy call on Chow.

The fruitful 30-minute meeting touched on matters such as lease extension, and the repair works of the MGS premises. 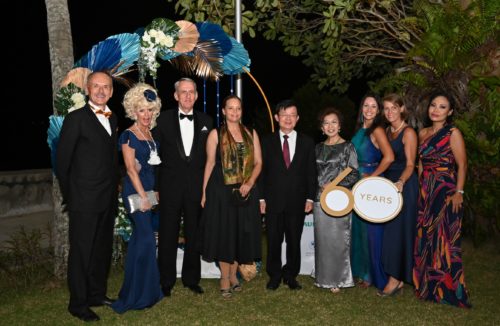