“We continue to perform well in our financial management despite having less revenue. 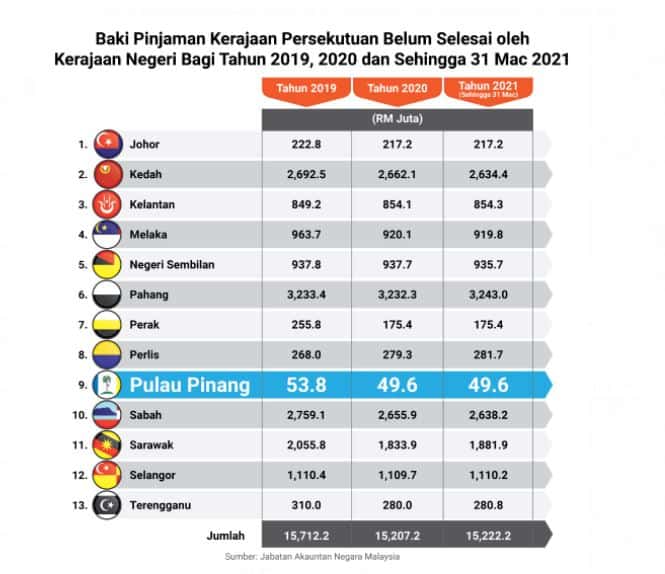 “The facts are clear that Penang is being sidelined when it comes to development funding from the Federal Government under the annual national Budget.

“Penang is only receiving RM0.996 billion in development funding under the Federal 2022 Budget, the second lowest among the states in Malaysia. We are just slightly better than Melaka.

“Meanwhile, other states are receiving billions in development funding.

Chow had said that the state’s gross domestic product (GDP) was accounted for between 6.7% and 6.9% of the country’s GDP in the recent three years.

“Given our contributions, Penang should be getting a development allocation of RM5.2 billion from the Federal Government,” he mentioned.

The Federal Government had announced a RM332.1 billion national Budget and RM75.6 billion was apportioned for development expenditure.

Penang is expected to receive only 1.3% of the total RM75.6 billion allocated for development expenditure next year.

Chow also highlighted that the state’s financial statements for the year 2020 had been audited by the Auditor General before being tabled in the State Legislative Assembly.

“The Penang government’s financial management has received a recognition by the Auditor General and the state has been given a ‘Sijil Berstatus Bersih’ (Certificate of Clean Status), which is also the ‘Sijil Tanpa Teguran’ (Certificate Without Reprimand), although the state recorded a deficit Budget last year.

“This proves that the financial management of the State Government is efficient and orderly.

“The Auditor General’s report states that the Penang government prioritised the implementation of state development projects.

“There was no new debt collection, while debt instalments were paid on schedule and no arrears.

“Data whitening was also implemented, and expenditure was done accountably and with integrity,” Chow quoting the report.