THE Pulau Tikus service centre has launched a donation drive to aid the flood victims in the states of Selangor and Pahang.

Its assemblyman, Chris Lee has called upon the public to take part in the programme by contributing infant milk formula, baby diapers and sanitary napkins.

“Each and every contribution is valuable. Therefore, we hope that the public can come forward and render their help.

“Our service centre will be giving out 300 sets (consisting of each item) and together with us, the office of Bukit Bendera MP (Wong Hon Wai) will be also donating a significant number of items.

“Donors can send their contribution to our office,” Lee said during a press conference held via Google Meet today.

Lee said Penang Island City Council (MBPP) councillor Connie Tan would be supplying the sanitary napkins from the ‘Period Poverty Programme’ which was initiated by Tan herself in August.

“While it is important to supply food to the flood victims, taking care of their health is also important especially for children and women.

“We understand the difficulties that they are going through now. Thus, we do not want them to be inflicted with diseases due to lack of sanitary products.

“This storm, which took place in Malaysia, is something unusual as tropical cyclones are new for us. With the warming of seas, it might happen again. So, we must be prepared for such occurrences in future,” he added.

Meanwhile, the Pantai Molek Village Community Management Council (MPKK) president Sean Lee, who was also present, said his team would be contributing RM2,000 for the initiative.

“We hope that more people would come forward and make their contribution as it is very much needed,” Sean said. 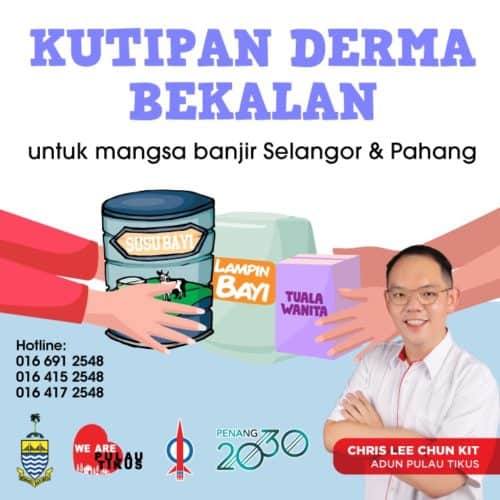 Fresh coat of paint for their home