The new plant is located near its first at the Penang Science Park North.

SIBS chief executive officer and co-founder Erik Thomaeus said the 46,450sq m new plant, which is located on a 15-acre site, is a larger facility than the first.

“It is aimed at boosting production of our modular construction materials.

“The plan from the beginning was to build a second factory after the first one, fully established in 2018, was producing at full capacity.

“We reached our maximum production capacity at the end of 2019. Hence, we have launched our plan and after a series of negotiations with the Penang government, we finally purchased the second piece of land at the beginning of 2020 for the second factory.

“This expansion project is anticipated to increase the production lines to approximately four times more than the current production lines. It is driven by the huge demand for SIBS production with an investment worth RM500 million in a few phases over the next five years. “The project is expected to provide an additional 1,200 employment opportunities to the locals and the opportunity to deliver to more markets and product categories,” Thomaeus said in his speech before state Entrepreneurial Development, Trade and Industry Committee chairman Datuk Abdul Halim Hussain officiated the grand opening ceremony of the new manufacturing facility today. 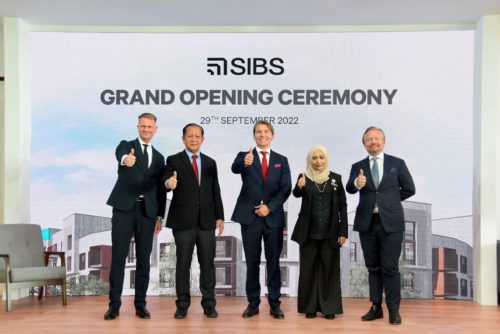 Abdul Halim, in his speech, congratulated SIBS for the outstanding milestone.

“The state government is pleased to see SIBS deepening its roots in the state through a major expansion.

“This project will definitely bring in investment, strengthen the socio-economy, increase job creation as well as provide opportunities for local talents to upskill.

“Such investment also will stimulate local businesses, thus contributing significantly to the economy of Penang by maintaining and strengthening its local supply chains.

“Thus, I would like to congratulate SIBS on its new facility plant.

“I am glad that the company once again has chosen Penang for the IBS expansion,” he said.