AN air of festivity prevailed in Bukit Mertajam as thousands of people turned out for the Pesta Tanglung Carnival 2019 at the Insa Dunia Food Court tonight.

“I want to congratulate the organisers for holding this event for the 17th year,” Chow said in his speech.

“I hope the event will continue to get the support of the people of Penang, especially Bukit Mertajam folk, in promoting Chinese culture among the various ethnic groups in Malaysia.

“We can all be united through the promotion of different cultures.”

Chow and the other VIPs had earlier taken part in a lantern walk for about 3km in Bukit Mertajam town.

The event was made merrier by the participation of the school band from SRJK (C) Kim Sen, stilt walkers and lion and dragon dance troupes.

It was a night particularly for many of the young ones, who were guided by adults as they paraded with various animal-shaped lanterns with LED lights.

Soon after Chow’s speech, a fireworks display lighted up the night sky.

Chow and the dignitaries then visited various stalls at nearby streets that were selling different merchandise, food and drinks, and conducting games for the children.

One street saw many bright round-shaped lanterns hung across it, so apt to the occasion. Below the lanterns was a display of shoe art by the contestants.

Even as it started to drizzle, many stayed on to catch the vibrant and exciting cultural performances at two stages set up for the celebration. 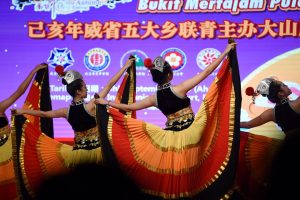