His eldest son, Datuk Seri Choot Ewe Seng, 67, who is the Penang Chinese Chamber of Commerce (PCCC) executive adviser, said his father had raised him and his five other siblings with good manners.

“My father had contributed much, especially to charity works in the society.

“He had shown us an exemplary character and all of us are proud of him.

“In fact, both my father and my 90-year-old mother are a loving partner,” he told reporters when met at his residence in Pantai Molek, Tanjong Tokong.

The elder Choot was a well-known figure in coffee powder industry. Through his grit and determination, he had transformed Kun Kee Food Industries Sdn Bhd into a main producer of coffee powder products in the country and abroad.

Aside from coffee powder industry, he was also involved in property development, information technology and oil palm plantation business.

Choot’s ‘Salute Kopi O’ brand had also become a favourite for the late Tan Sri Loh Boon Siew, who would patronise the coffee shops in town that used the brand back then.

Earlier, Chief Minister Chow Kon Yeow and his entourage came to pay their last respects at about 6pm.

He was accompanied by state assemblymen and PCCC members, who were welcomed by Ewe Seng and his family members.

Ewe Seng later ushered Chow and some other visitors into the house for a chat.

Choot’s funeral service will be held at his residence on Friday (April 2) at 6am. The cortege will leave for burial at Nirvana Memorial Park, Semenyih, Selangor. 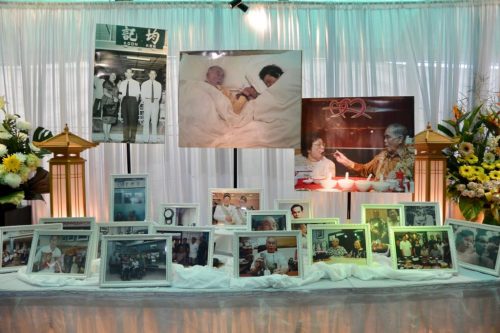