A 38-YEAR-OLD businessman and a 63-year-old retired teacher have been appointed as the new Seberang Perai City Council (MBSP) councillors to serve the people.

Both councillors were appointed to replace Aziss Zainal Abidin and Marshidaliza Marzuki from Parti Pribumi Bersatu Malaysia, who no longer served as MBSP councillors since Aug 31.

The term for the two new councillors started effectively from Sept 1 until Dec 31 this year.

Ngoh said as a newcomer, he has a lot to learn about the job scope and would try his best to carry out his duty.

“For this first term, I want to highlight indiscriminate waste disposal in some of the housing areas on the mainland.

“From my own observation, I notice that some residents in the housing area still lack awareness on disposing garbage properly.

“As a result, some of the housing areas are filled with rubbish.

“So, I want to change that kind of mindset by conducting communal clean-ups (gotong-royong) regularly among the community to nurture that sense of awareness,” he told reporters after being sworn in today.

Meanwhile, Rohayah said she wants to focus on matters related to public infrastructure and amenities.

“As one of the new faces, I would like to ensure that MBSP can provide better and quality infrastructure and amenities to the people.

“As an example, I can propose to the city council to build an overhead pedestrian bridge near schools to solve traffic congestion problems.

“Apart from reducing the traffic congestion, it could also safeguard the children when they want to cross the road and thus minimise the risk of unnecessary accidents,” said Rohayah, who has served as a school teacher for 35 years.

On July 10, another two new MBSP councillors were sworn in. They were Noor Azuawati Ahmad and Ooi Boon Sheng. Both are from PKR.

They replaced Shuhada Abdul Rahim and Dr Seow Kweng Tian, who are also both from PKR.

The composition of MBSP councillors according to parties this year are 10 from DAP, nine from PKR, two from Amanah, and three from non-governmental organisations.

Jagdeep congratulated the newly appointed councillors and urged them to carry out their duties diligently and effectively to serve the people in Seberang Perai. 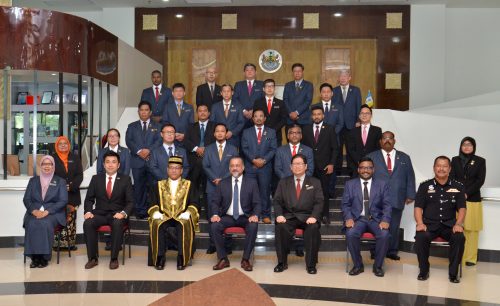 “I also would like to say thank you to the previous MBSP councillors for their contributions to the city council,” he said.